A few days ago, we had to ﻿take the tough decision to let our elderly Katy go in peace after she collapsed suddenly suffering from what our

A desperate cry for help for our 56 rescued donkeys, 2 horses and the future of their home; our small sanctuary in Israel.

We recently took in a young donkey who we have called Joey. All we know about him is that he came from the Palestinian West Bank, across the border and he’d apparently been used to running alongside his mother as she pulled a cart. Tragically about four months ago was struck by a car injuring his right back leg leaving him with a limp, meaning he was no longer able to keep up running along by his mother’s side. His mother must have felt distraught because in the end the owner

Dear Zachariah... a gentle donkey who was tortured in the cruelest way by the despicable act of having his eyes gouged out. He came to us in 2017 and we are incredibly proud of him and his progress. We knew nothing of his history but it was suspected that he may even have come from across the Syrian border into Israel. He’d suffered terrible cruelty not just with his eyes but he also had what looked like stab wounds on both sides of his neck. It has taken nearly 5 years of de

It is with great sadness that we recently had to finally say goodbye to our precious and very handsome boy, Prince. Such a wonderful horse soul and a great and gentle friend to all our little donkeys, Prince had suffered a horrendous life before coming into Lucy's care back in 2016. He’d been routinely brutally beaten and involved in a collision with a vehicle in a nearby Arab town. He was left with an old fracture to his back leg and part of his poor little mouth was missing 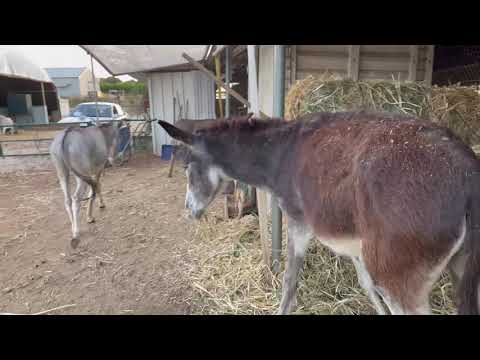 As the UK charity has only been in existence since October 2017, our News feed starts then; if you want to see older articles from Lucy (starting 2015), have a look at the Israeli charity website by clicking here.

Click here to see how else to keep up to date.